They are the road warriors of highways, truck stops, and loading docks. Blue-jeaned executives whose office is their cab. Guardian angels in 18-wheelers, often the first to stop at an accident to make sure us four wheelers are safe too. But most of all truckers are men and women who sacrifice sleeping in their own beds and kissing their kids goodnight so we have fresh milk in our fridge and gas in our cars. In recognition of their dedication to keep America moving, Henry Repeating Arms is honored to present the Henry Golden Boy Trucker’s Tribute Edition.

A trucker is the real deal just like a Henry Repeating Rifle, living life based on the same values of reliability and accuracy. He knows a loaded truck, much like a loaded gun, is something to respect and that safety is key on the road. What is more appropriate for the trucker moving across America then a true piece of Americana — the Henry Rifle, authentically produced, assembled and engraved in the USA by American craftsmen.

A symbol of American Pride, this unique Henry Trucker’s Tribute Edition is a testament to our country’s appreciation of truckers, their spouses and families and the many miles they log on our behalf. Because if we’ve got it, there’s an American trucker somewhere who made it possible and we salute them. 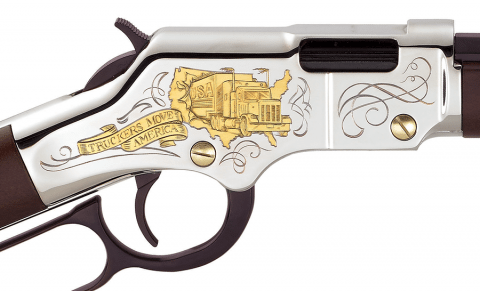 On the right side of the rifle is an image of an eastbound 18-wheeler moving commodities coast to coast across the wide expanse of the United States. It has been expertly cut by hand engraver Heidi Roos of Baron Engraving and plated in 24K gold with a banner that reads TRUCKERS MOVE AMERICA. Framing the image and impressed directly onto the receiver cover is classic truck pin striping that any trucker can identify with.

The .22 LR’s tubular magazine holds 16 rounds of .22 LR, 21 rounds of Short. Weighing in at 6.75 lbs. they’re a pleasure to carry, shoulder and shoot, whether you’re just plinking or going after small game. 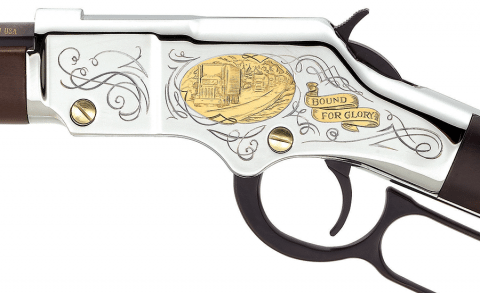 The left side of the receiver cover features an engraved image of a convoy of trucks heading west on a ribbon of tree-lined highway. This image is also plated in 24K gold and sports the rightful banner BOUND FOR GLORY. The classic truck pin striping detail continues with bright cuts highlighting the artwork.

The traditional 20″ octagonal barrel is outfitted with a classic fully adjustable semi-buckhorn rear sight with a reversible white diamond insert and a brass beaded front sight. The tubular magazine tops off at 10 rounds. 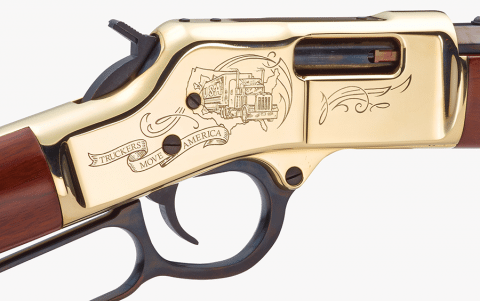 Both the straight-grip stock and forearm are crafted of select American walnut accented with a brass barrel band and Henry’s recognizable brass receiver. All have that crisp, smooth action that sets an authentic American-made Henry apart from other lever action rifles on the range and in the woods today. 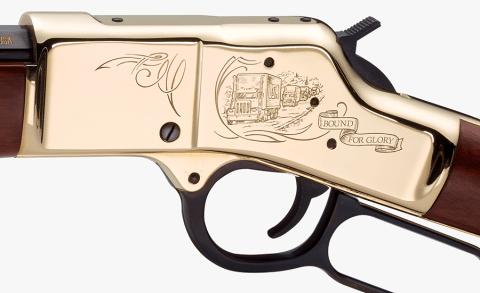 Each Big Boy receiver comes drilled and tapped for easy scope mounting, and the barrels are fitted with fully adjustable sights. Scope and mount not included.