The Battenkill reels have been a historically successful line for Orvis.  The Battenkill reels are simple, trouble free, and reasonably priced.  They have been the ultimate in function and simplicity throughout the years.  Welcome to the powerful, technologically advanced, and yet still accessible new generation of Battenkill reels. The latest version of the Orvis Battenkill Disc Reel is true to its heritage in looks and performance.   The Orvis Battenkill Disc Reel has been updated with the latest in design improvements.  It features a significantly more powerful drag. The porting and finish pay unmistakable homage to the Battenkills of the past, but this reel incorporates their best-selling mid-arbor design. Underneath that mid arbor is the same sealed drag system found in the Hydros SL.  The drag system incorporates six interacting carbon and stainless drag surfaces. Positive click drag is simple and easy to adjust. The reel is built of 6061-T6 aircraft aluminum with an ergonomic Delrin handle.  Changing from left to right hand retrieve is simple. In black nickel. Imported. 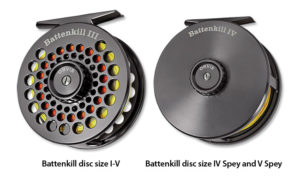 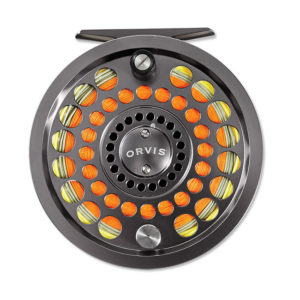